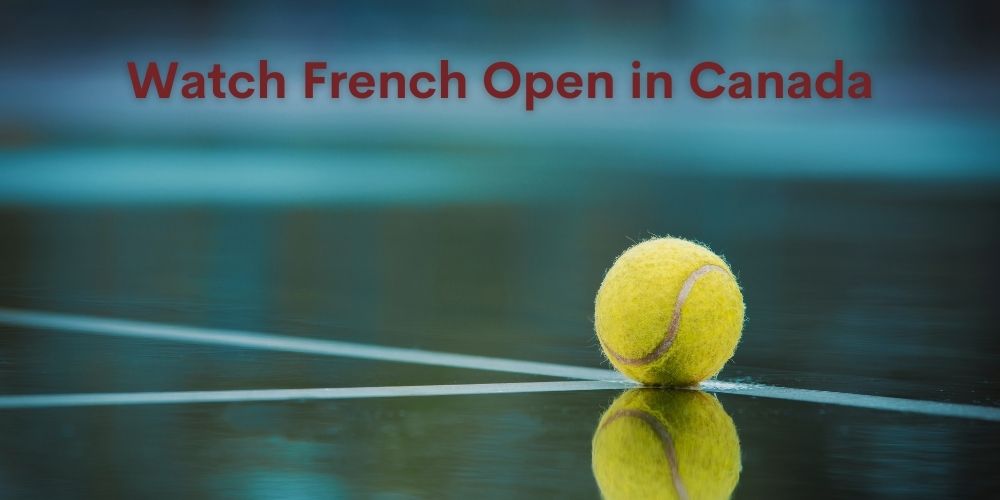 You can Watch French Open in Canada. Tennis fans come from all over the world. Every year, people eagerly await the clay court Roland Garros tennis tournament. The same goes for Canadians. Many renowned players who play in the French Open are Canadian, which is why Canadians mark their calendars for the tournament.

Every year, many Canadian players compete at Roland Garros, but no one has ever won the title. Except for Fernandez who defeated Emma Navarro in the French Open girls’ singles final. She became the first Canadian female who won the title of junior in 2019.

Felix Auger-Aliassime and Milos Raonic both competed in the men’s singles tournament in 2021. Among the women were Leylah Annie Fernandez and Bianca Andreescu for Women’s singles. Sharon Fichman and Gabriela Dabrowski played doubles at the French Open 2021.

As a Canadian, are you looking for ways to watch the French Open live on your TV or online?

In this article, you will find the way!

Canadian Tennis fans can enjoy the live French Open in their home country on their smart TV’s now. The French Federation for Tennis has signed an agreement to broadcast the tournament live on:

The Réseau des sports is a channel focusing on sports and related shows in Canada. CTV Specialty Television Inc owns and operates this channel, which is available in 2.5 million homes. There is also an English-language sister network, The Sports Network (TSN), which translates as “The Sports Network”.

RDS offers satellite pay television and is available on most cable systems. In addition, it offers IPTV channels. The RDS broadcasts the French Open in French using their own commentators.

Sports-related programming is a specialty of TSN’s channels, including live and recorded event broadcasts, sports talk shows, and other original content.

Like its French sister network RDS, TSN is available via satellite pay television and most cable systems. There are also IPTV channels available on the network. TSN has exclusive rights to all four Tennis Grand Slams in Canada. The channel announced long-term extensions for the Australian Open, French Open and Wimbledon in 2012, followed by the US Open the following year.

How to Watch the French Open Online in Canada

In Canada, there are many ways to watch the French Open without cable.

The new way to get TSN is through TSN Direct. Canadian sports fans can access TSN’s extensive live and on-demand programming via this subscription-based streaming service, which requires only an Internet connection. TSN’s five feeds are fully accessible, as well as exclusive bonus streams for major sporting events.

All Canadians can subscribe to TSN Direct by visiting TSN.ca/Subscribe. A monthly subscription costs $19.99 per month, or a pre-paid annual plan costs $199.90 (12 months for the price of 10). The subscription automatically renews, or you can cancel at any time.

TSN Direct is compatible with the following devices:

Note: On mobile devices, TSN does not support the playback of live video content via a web browser. You can access TSN on your mobile device by downloading the TSN app.

There are tennis news updates and tennis tournament telecasts on the Tennis channel. For this reason, Tennis Channel has a deal with the French Federation to broadcast French Open matches live. Tennis Channel is accessible through Sling TV, a popular streaming service. Sling TV offers live coverage of the French Open on a wide range of devices, so you can choose a plan that is right for you.

Sports programming is one of ESPN’s most famous features. The French Federation has also agreed to allow ESPN to air Roland Garros live as part of their deal. On Fubo TV, you can watch ESPN. It is an online sports streaming service. Besides offering different packages, it is also compatible with a variety of devices. You can watch the French Open live on Fubo TV if you have a subscription.

A number of sports channels are available through the DirecTV stream. You can also watch ESPN and Tennis Channel among many other sports channels.  As part of an agreement with the French Federation, these channels broadcast the French Open live from Roland Garros Stadium. You can watch ESPN and Tennis Channel in a basic package without adding any add-ons with a DirectTV Stream subscription. With DirecTV Stream, you can watch the tournament from anywhere.

How to access online Streaming Services to Watch French Open

There are geo-restrictions on all of the streaming services we discussed above. Those who live outside of the United States are not able to use them. Fortunately, there is an easy solution. Simply connect to a VPN to gain access from any location. There will be no need to worry about anyone knowing that you are outside the United States.

The best VPN for accessing all of the above streaming services is Express VPN. ExpressVPN allows you to stream without a hitch. Thanks to its amazing speed, you won’t experience interruptions while streaming.

Moreover, Express VPN has over 3000 servers spread across 90+ countries. Additionally to Netflix and DirecTV Stream, this extensive network will allow users to unblock HBO Max, Sling TV, FuboTV and more.

You can cancel ExpressVPN’s VPN services within 30 days for a full refund. To do so, follow the instructions below.