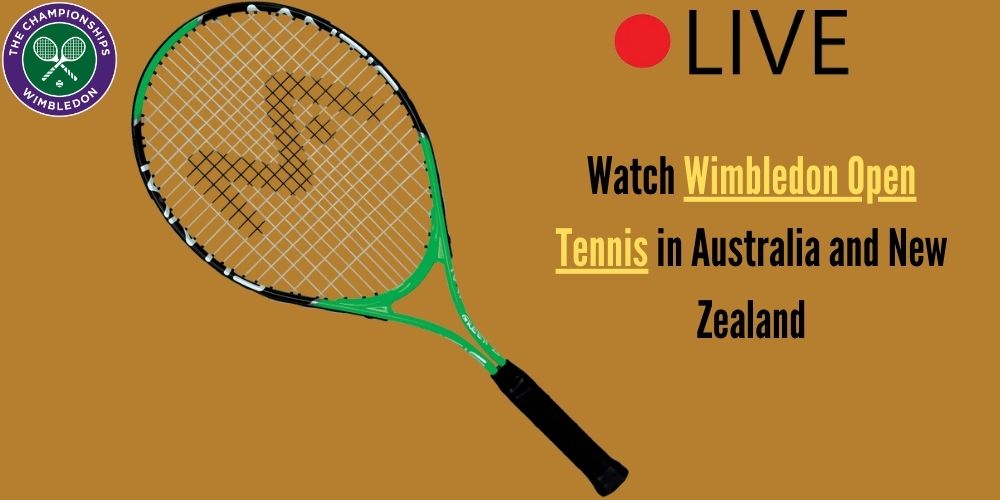 Like the rest of the world, All England Club has penned agreements with broadcasting partners in Australia and New Zealand. Tennis fans can watch live matches of the Wimbledon Open on these channels. New Zealand’s Sky NZ will broadcast the event, while Australia’s Nine has the rights to the broadcast. Both Sky NZ and Nine network have online streaming apps titled Sky Sports Now and Nine Now. Other streaming apps like YouTube TV allow you to access Wimbledon Open via ESPN, which also covers live events. You can also watch Wimbledon Open on Tennis Channel.

Lleyton Hewitt, an Australian tennis professional, won the Gentlemen’s singles title at Wimbledon Open in 2002. Ashleigh Barty from Australia will defend her ladies’ singles title in 2022.

Tennis fans in New Zealand and Australia eagerly anticipate Wimbledon Open every year. How can you watch Wimbledon Open without cable or a cable connection in your country? I am writing to tell you how. Let’s find out.

Following are the channels with the rights to broadcast live coverage of the Wimbledon Open in Australia and New Zealand.

Known as Channel Nine or simply Nine, the Nine Network is a major commercial free-to-air television network in Australia. Nine network holds exclusive rights for broadcasting all Grand Slam events in Australia, including Wimbledon Open. The remaining three are the Australian Open, US Open and the French Open. Nine is available via terrestrial, satellite and cable systems. The channel slots for Foxtel/Optus cable providers are 100/209. For Foxtel satellite transmission, the channel slot is 100; for VAST, the channel slot number is either 8 or 9.

Nine Network Australia and Sky NZ offer streaming services via apps for those who wish to watch online. Additionally, these apps are compatible with both iOS and Android devices.

It is the streaming service of Nine Network. Subscribers to 9NOW can watch Wimbledon Open. Additionally, you can download the app from the store of your device.

Through Sky Media, Sky Sports subscribers can also watch Sky NZ online. It does not require a Sky Box. The app allows you to watch live and on-demand content from 12 Sky Sports and ESPN channels. In addition to mobile devices, this app is compatible with many other devices.

This table summarizes the streaming services.

Another way to watch Wimbledon Open online is via Tennis Channel or ESPN app. You can download the app from the Apple or Google Play stores. If you wish to use the app to access both channels, you must have a cable/satellite subscription. There is some free content available.

How to access Wimbledon Open by using a VPN

Do you have problems accessing these streaming services online? Or, receiving a message saying, “Our services aren’t available in your area”. Since all of these OTT services are geo-restricted. This makes them difficult to use outside of the United States. You can, however, access them via a VPN.

In a VPN, you are given a virtual IP address, and the connection is tunnelled through the Internet. By doing this, your true location is anonymous. Therefore, it’s possible to access all these services as well as Netflix, Showtime, and HBO Max, using a VPN.

Choose a VPN wisely. This way, there will be no sluggish performance. A VPN should also ensure data privacy.

Express VPN gives you seamless access to all the above streaming services. Because Express VPN boasts more than 3000 servers in more than 90 countries, this is the case. Due to its exceptional speed, you won’t face interruptions when streaming.

You will receive a full refund if you cancel ExpressVPN within 30 days. Would you like to connect to a VPN? Read the instructions below.