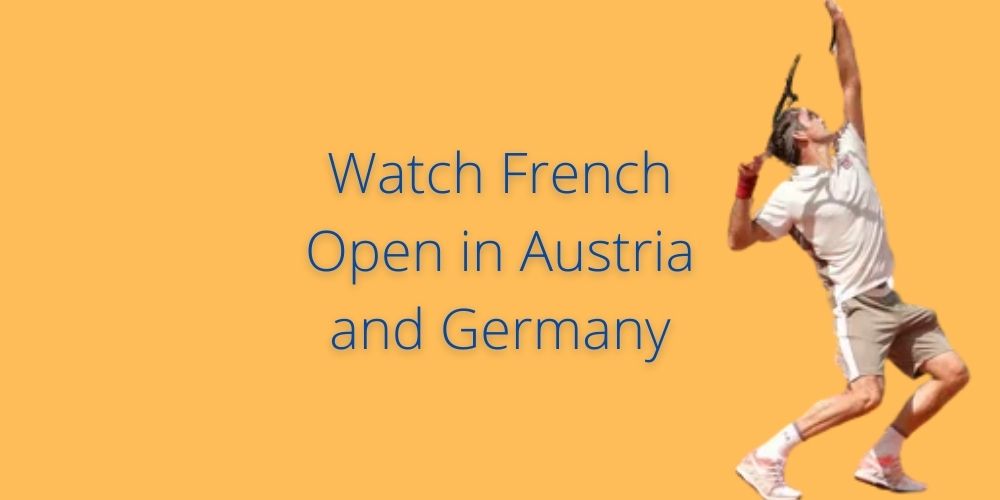 Austrians and Germans have a long history with the French Open. Professional players from both countries participate and compete each year for multiple titles. Therefore, clay courts tournaments excite Germans and Austrians equally as well as the rest of the world every year. I am going to discuss how to watch the live French Open in Germany and Austria later in this article. Let’s have a look at some renowned players from both countries first.

Kevin Krawietz and Andreas Mies won the doubles title two years in a row in 2019 and 2020. In 2014, Anna-Lena Grönefeld from Germany won the mixed doubles title. How can you watch a live stream of Roland Garros from the stadium? Come on, let’s talk.

Both Alpine countries Germany and Austria have official French Open broadcasters. For Germany, the French Tennis Association signed an agreement with ServusTV to broadcast Roland Garros. While for Austria ORF holds the right for broadcasting.

Austrians can access ServusTV via a terrestrial transmission and Europe-wide via the Astra 19.2°E satellite constellation. It is accessible via cable system and IPTV in Germany, Austria, and Switzerland.

Österreichischer Rundfunk (The Austrian Broadcasting Corporation), or ORF, is a state broadcaster in Austria. TV channels from ORF are broadcast both terrestrially and via a satellite, SES Astra 1H, at 19.2° east. Through satellite ORF 1 and ORF2 are encoded, allowing only Austrian residents with a television license to view them. ORF’s Sports+ television channel broadcasts tennis-related programming.

SerusTV Germany and ORF in Austria both offer online streaming services. Sports programming is also available live online on both channels. So if you want to watch the French Open online in Germany or Austria, access their official broadcaster’s website. Both channels have apps for iOS as well as for Android users. Apple and Android users can also download apps from their app stores.

Online streaming of Roland Garros is possible in other ways as well. Sling TV, FuboTV, YouTube TV, and other over-the-top streaming services are the most popular options. There are many devices available to use these services on, and they are inexpensive compared to many cable services.

Tennis lovers will find NBC, Tennis Channel, and ESPN in DirecTV Stream’s $89.99/month package. In addition to broadcasting live Roland Garros, this streaming service also provides a lot of entertainment channels. Also, streaming is allowed on multiple devices at the same time. So, you won’t need to hide the remote at the time of the tennis match.

Stream the French Open with Sling TV on ESPN

Sling TV is a cheap online streaming service with a sports package of just $35/mo and only $10 for the first month. When you subscribe to Sling Orange, you will have access to ESPN, ESPN2, beIN sports, and many other channels for news and entertainment. Sling TV also features DVR storage for recordings and an on-demand library. In addition, you can access on 3 devices at the same time. So the family can watch a movie together in the lounge while you watch live tennis matches from your room.

If you also love other sports along with tennis, then FuboTV is the best choice for you. FuboTV is famous for its sports programming. FuboTV’s starter package includes ESPN, FS1 and NBC, as well as storage space, device compatibility, and simultaneous streaming. ESPN and NBC both are the official partners of the French Open for long. So, with a FuboTV subscription, you can enjoy live Roland Garros.

In a single basic package, Youtube TV offers a wide range of channels from different categories. There are many sports channels available on YoutubeTV. Also, it offers streaming in 4K resolution for some sports. You can watch live the French Open with a YouTube TV subscription with ESPN and NBC Sports. A 14-days trial is also available for testing the services.

Starting with $4.99/mo NBC’s Peacock TV is the official broadcaster of the French Open. Also, you will unlock a lot of entertainment by subscribing to Peacock Premium. A wide range of device compatibility is also available with the Peacock TV.

Sling TV, FuboTV, YouTube TV etc. are geo-restricted. You can’t access them outside the United States. But there is a simple and easy hack. You can use a VPN to unblock the geo-restriction.

The VPN hides your IP address by rerouting it through a specially configured server operated by a VPN host. So, a VPN provider with a reliable server in USA will allow you to access any streaming service from anywhere. All you need is a reliable VPN with high speed servers in the USA.

We recommend you to choose ExpressVPN . It is the best VPN to access any streaming service. In addition, you can also install the VPN on your mobile phone.

Following are the reasons we recommend you use Express VPN:

That’s how you can Watch French Open in Austria and Germany!