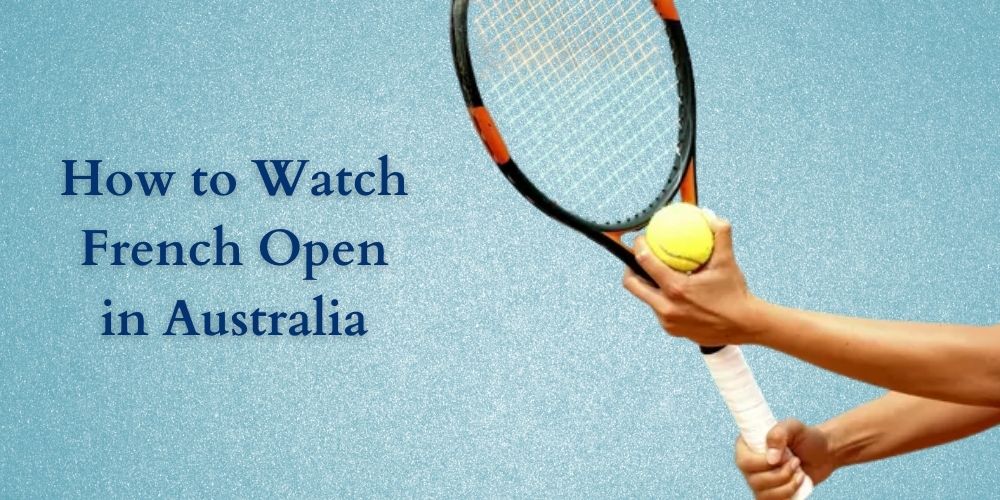 Similar to other Grand Slam events, the French Open is hugely popular in Australia. Aussies early wait for the tournament. For this reason, the French Tennis Federation has signed agreements with an Australian channel to broadcast Roland Garros live.  I am going to discuss the channel details in this article. But let’s start by recalling the Australian champions of the French Open. Ashleigh Barty was the title winner of the Women’s Singles at the French Open 2019. John Fitzgerald along with his Swedish partner Anders Järryd won the title for men’s doubles in 1991. Todd Woodbridge and Mark Woodforde were the men’s double title winners in the year 2000. The women’s doubles winners were Samantha Stosur and her American partner Lisa Raymond in 2006. In 2007, Alicia Molik with her Italian partner Mara Santangelo named the title to them.

Of course, Aussies are looking for more titles in the upcoming years. Let’s discover the ways to watch live coverage of the French Open from clay courts together.

The highest-rated television network in Australia is Nine Network, available via terrestrial, satellite, and cable transmission. It provides extensive coverage of the Roland Garros tournament through its free-to-view channels Channel Nine, 9Go, and 9GEM.

How to Watch French Open in Australia Online

If you want to access the Clay courts event Roland Gaross online stay connected. I am telling you how to do this.

There are two ways to stream the French Open online in Australia.

Stan Sports is Nine Networks over the top service in Australia. There are also French Open telecasts on Stan Sports. Also, Nine Network’s on-demand channel 9Now broadcasts the event. With a 7-day trial period, you can subscribe to any of the suitable Stan plans. You can add Stan sports for $10/mo to your selected plan. The trial period is the same for Stan Sports i.e. 7-days. Stan is also compatible with a wide range of devices like many other OTT services. So, you can watch anywhere on mobile on your TV if at home.

Stan is available on many devices such as Smart TVs, gaming consoles, media players, PCs and Macs, tablets and smartphones. Its app is available for iPhone and Android mobile users.

Channels like ESPN and Tennis Channel are famous for their Grand Slams coverage. These channels are available on many popular streaming services like Sling TV, Fubo TV etc. These online streaming services provide a good replacement of cable and are accessible through a wide range of devices.

DIRECTV Stream offers ESPN for all of its subscription tiers. While for tennis lovers, NBC, Tennis Channel, and ESPN are combinedly available in DirecTV Stream’s package. In addition to broadcasting live Roland Garros, DirecTV Stream also provides a lot of entertainment channels. Also streaming is allowed on multiple devices at the same time. So, you can enjoy your tennis match and the rest of the family can enjoy a movie at the same time.

Sling TV is a budget-friendly over-the-top service with a sports package of just $35/mo. And for the first month, only $10. Sling Orange subscribers will have access to ESPN, ESPN2, beIN sports, and many other news and entertainment channels.  With sports add-on you can have access to Tennis channel too. In addition to on-demand libraries and add-ons, Sling TV provides DVR recording storage. Additionally, you can access the service on three devices at the same time. Therefore, everyone can watch their favorite show without conflict on the remote.

FuboTV is famous for its sports programming. So, if you also love other sports along with tennis, then FuboTV is the best choice for you. FuboTV’s starter package includes ESPN, FS1 and NBC. Additional features of FuboTV are: storage space, multiple device compatibility, and simultaneous streaming. ESPN and NBC both are the official partners of the French Open since long. So, choose a FuboTV plan and enjoy live coverage of Roland Garros from Pairs in Australia.

With a monthly subscription price of $4.99, access NBC on Peacock TV as it is the official provider of the French Open. You will also gain access to a lot of entertainment by subscribing to Peacock Premium. The Peacock TV is compatible with a variety of devices as well.

There are geo-restrictions on Sling TV, FuboTV, YouTube TV, etc. Those services are not available outside of the U.S. There is, however, a simple and easy hack. Simply use a VPN service.

VPNs mask your IP address by rerouting it through specially configured servers operated by VPN hosts. You can access any streaming service from anywhere if you use a VPN service with a US server.

Our recommendation is to choose ExpressVPN. It is the most reliable VPN for accessing streaming services. Additionally, the VPN can be installed on your mobile device.