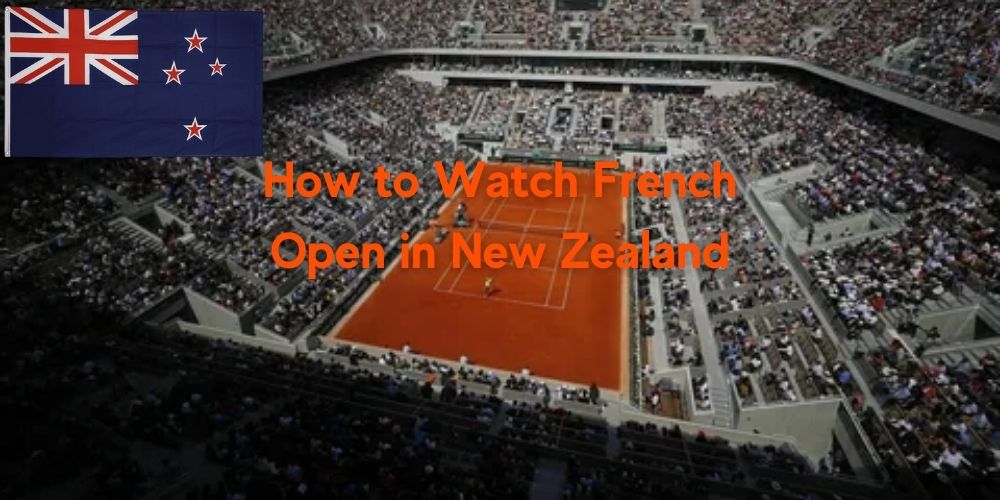 As a Kiwi, are you looking forward to watching the French Open live? Staying at home and watching live tennis in Paris is possible. In this article, I am going to discuss the ways to watch the French Open on TV as well as online in NZ.

Now tennis fans in NZ can view live coverage of matches on the Roland Garros clay courts. Sky Sports is the official broadcaster of the tournament. As the French Federation has made an agreement with Sky Sports to broadcast live the French Open tournament for Kiwis.

Sky Sports and its availability

New Zealand’s Sky Network Television Limited is a broadcasting company. It offers satellite pay television, media streaming, and broadband internet access. In addition, it provides wholesale IPTV channels to Vodafone New Zealand. Sport channels are from 50 to 69 on satellite television. And they include Sky Sport Select, Sky Sport 1 to 9, and select Sky Sport Pop-Up channels for special sports events. In addition, the French Open is included in special sporting events.

How to Watch the French Open Online in New Zealand

If you want to watch the French Open without cable in New Zealand there are many options available.

Sky Media offers online streaming services for Sky Sports as well. Using this, you can access LIVE as well as on-demand access to 12 Sky Sports and ESPN channels. You don’t need a Sky Box for these services. You can stream your content to any connected device or cast it to your TV.

It’s as simple as subscribing to Sky Starter for $25.99 and adding your favorite sports channel. It’s free for the first month after you subscribe. There is also a free 7-day trial available.  After one month you will need to pay $25.99 for Sky Starter + $31.99 for Sky Sports per month.

If you want to watch Sky Sport NOW on the big screen, you can use:

Watch the French Open on Tennis Channel with Sling TV

The Tennis channel specializes in Tennis news and telecasts of tennis tournaments. Because of this, the French Federation has an agreement with Tennis Channel for live broadcasts of French Open matches. Sling TV, which is a popular streaming service, allows subscribers to access the Tennis channel. You can choose any suitable Sling TV plan and enjoy live coverage of the French Open on a wide range of compatible devices.

Watch the French Open on ESPN Channel with Fubo TV

ESPN is a famous channel for sports programming. As part of a deal with the French Federation, ESPN will also broadcast Roland Garros live. You can access ESPN on Fubo TV. Fubo TV is an online sports streaming service. It offers different packages and is also compatible with a wide range of devices. With a Fubo TV subscription, you can watch the French Open live.

DirecTV stream is a streaming service which offers a wide range of sports channels. Among a number of sports channels, ESPN and Tennis Channel are also available.  These channels broadcast the French Open live from Roland Garros Stadium as a part of an agreement with the French Federation. With a DirectTV Stream subscription, you can access ESPN and Tennis Channel in a basic package without adding any add-ons. So, you will be able to enjoy the tournament anywhere with DirecTV Stream.

Watch the French Open on NBC Sports with YouTube TV

Youtube TV features a huge number of sports channels. Also, some of them are available in 4K resolution. On YouTube TV Tennis fans can watch NBC sports. As Roland Garros’ official broadcast partner, NBC sports also broadcast live coverage of the French Open. Therefore, you can watch tennis matches in high definition with a feel as if you were at the stadium in person.

All of the streaming services we discussed above are geo-restricted. If you live outside the United States, you cannot access them. Luckily, there is an easy solution. You can use a VPN to access them from anywhere in the world. You won’t have to worry about anyone knowing you are outside of the United States. By following a few simple steps, you can use VPN.

Express VPN is the best VPN to access the above mentioned streaming services wherever you are. With ExpressVPN, you can stream effortlessly. It means, you will observe less interruptions due to its awesome speed.

In addition, Express VPN has more than 3000 servers spread across 90+ countries. This extensive network would also allow users to unblock content from HBO Max, SlingTV, FuboTV and more in addition to DirecTV Stream and Netflix.

ExpressVPN’s VPN services come with a 30-day money-back guarantee. By following a few simple steps, you can use VPN