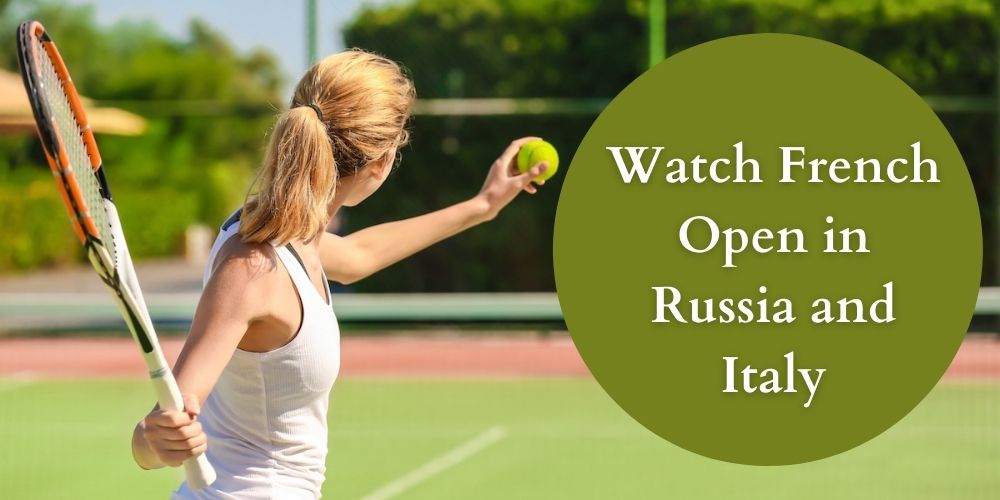 As in the rest of the world, Roland Garros has a huge following in Russia and Italy. They want to see their favorite player compete on clay. This is why they look forward to this event early each year. Additionally, there are many great tennis players from these countries who have won the French Open.

I will begin by talking about some famous tennis players from your country. Later in the article, I will discuss how to stream live the French Open in Russia and Italy. Former Russian tennis player Yevgeny Kafelnikov is a famous name. He won both the singles and doubles titles in 1996. During the 1997 and 2000 French Opens, he again claimed the men’s doubles title.

Anastasia Myskina, Svetlana Kuznetsova from Russia won the women’s singles title in 2004 and in 2009 respectively. The most famous player from Russia is Maria Sharapova. In 2012 and 2014, she won the Roland Garros title twice.

Francesca Schiavone is an Italian tennis player, who won the women’s singles title in 2010 at Roland Garros.

We’ll talk about how to watch live coverage of the French Open in both countries now.

Watch French Open on your TV in Russia with Official Broadcasters

Eurosport is a Pan-European television sports network owned by Discovery. Channels are available in 54 countries and 20 different languages, providing viewers with access to European and international sporting events. Thanks to a partnership with Roland Garros, Europeans, Russians and Italians can watch the French Open live on television.

It has two TV channels that telecast the Roland Garros Events:

How to watch the French Open in Italy and Russia online?

There are several ways you can stream the French Open online if you want to replace your cable subscription. These services are affordable and easy to find.

Numerous streaming services are available with channels that broadcast Roland Garros live online. In addition, these services offer many other useful features like simultaneous streaming, DVR storage etc. With these services, you can watch live tennis matches on your smartphone, read tennis news, and view sports information. To use an OTT service, you need to sign up for a proper plan.

Tennis Channel is the best option if you love watching tennis on your phone and want to keep up with the latest tennis news. The best thing is that Tennis Channel is also an official partner of the Roland Garros events. Other options are ESPN and NBC sports. Online streaming services allow you to watch these channels via the Internet. That is what I will discuss.

Watch French Open in Russia and Italy on DirecTV Stream. It is a popular streaming service that also broadcasts in Italian. You will get the following benefits by subscribing to the DirecTV Stream Plan.

Stream French Open with Sling TV on your Smartphone

With a Sling TV subscription, you will get the following benefits:

Among OTT services, FuboTV is particularly known for its sports programming. Apart from the number of sports channels, you will also get the following benefits with a FuboTV subscription.

There is geo-blocking on Sling TV, FuboTV, Peacock TV, etc. Accessing these services elsewhere than the USA is not possible. In order to unblock these sites which, broadcast the French Open, you need a VPN. While choosing a VPN service, make sure your VPN has fast servers.

Using a VPN provides you with access to several online streaming services. It works by hiding your virtual address, which stores the location from which you’re connecting. By choosing this method, the streaming site only recognizes the virtual IP address of the VPN server you selected. So, you can access any of the streaming services easily.

Note: You should not violate the streaming site’s terms of service by using a VPN.

Our Recommendation for VPN

Choose ExpressVPN as our recommendation. This VPN is the most trusted for accessing any service. You can also install the VPN on your mobile device.

How to Access French Open in Russia and Italy