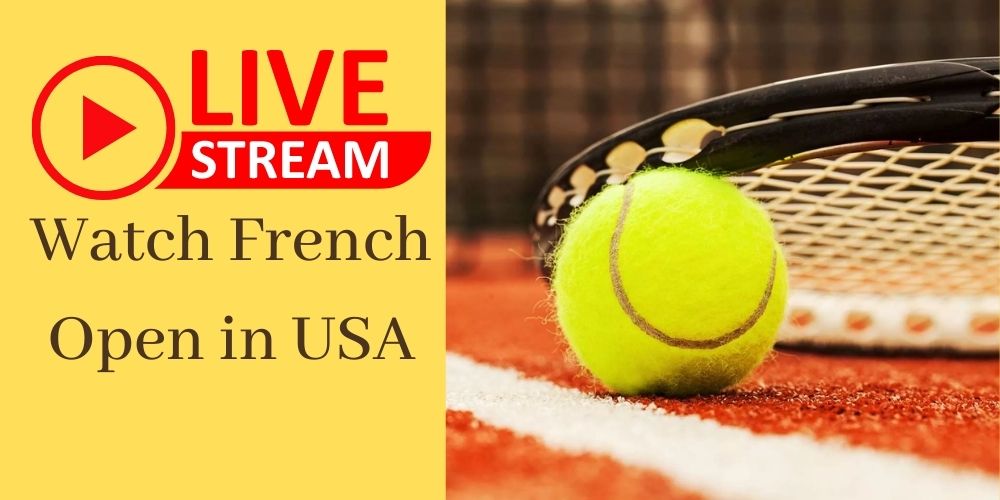 Tennis is a popular sport among Americans. In 2020, the number of Americans playing tennis increased by 22% to 21.64 million, according to a report produced by Sports Marketing Surveys. Americans are proud of their many tennis players who have won numerous titles. Among famous American tennis players are: Serena Williams (French Open title twice), Pete Sampras, Andre Agassi, Jimmy Connors, and Jim Courier.

According to a report, tennis is the sport Americans still love to watch on TV. That’s why the French Federation has extended its agreements with the networks operating in the USA to increase viewership.

You can watch live coverage of French Open on your TV. Here are the ways:

In US following channels have live French Open Coverage rights:

In addition to covering many other sports events live, NBC Sports holds the rights to broadcast live French Open. It is telecasting French Open since 1983. NBC Sports is already available via the cable system. You can also access it via the website if you already own a cable subscription. Go to NBC Sport’s network website and enter your cable provider details.

Peacock TV is NBC’s over the top service. The Peacock TV app works with iOS, Apple TV, Android, Android TV, Chromecast, LG smart TVs, Vizio TVs, PS4 and Xbox One. Additionally, you can access it via the website. A Peacock TV subscription costs just $4.99/month, and you can stream live French Open on any device.

Tennis Channel brings live French Open to the audience along with news of their favorite players and a lot more. This channel is available through cable, satellite, IPTV and streaming services. A regional sports network in USA named Sinclair it also owns Tennis Channel. It broadcasts four hours’ coverage of the Roland Garros French Open tournament for the first nine days.

Additionally, the French Federation has signed a contract with Bally Sports for live coverage of the French Open. Bally Sports is a Regional Sports Network in the United States.  It is available through the cable system, satellite, IPTV and over the top streaming media.

Those without cable need not worry, there are still plenty of choices.

If you are an Amazon Prime subscriber, you can subscribe to Eurosport Player to watch live French Open. Amazon Prime offers a trial period of 7 days.

Stream French Open in US via Sling TV

For new subscribers, the offer is even better with a deal. The deal lets you get a whole month of Sling Blue for just $10, and you can save a significant amount.

Additionally, you can get Tennis Channel and other if you add sports extra, which only costs $11 a month. This way is much cheaper than paying for cable.

Stream French Open in US via Fubo TV

Another alternative for cable replacement is FuboTV. Starting at $64.99/mo, FuboTV offers NBCSN along with a lot of other sports channels in its starter package. Add Tennis Channel for $7.99 a month. Some sporting events are available in 4K resolution. Pick it as it comes with a FuboTV free trial period.

Stream French Open in US via DirectTV Stream

Or, alternatively, choose the DirecTV Stream. Offers NBCSN and Tennis Channel for $84.99 a month along with more than other 90 channels. Still, it’s a better cable replacement as it offers all regional sports networks for free. Furthermore, you will have free access to Balley Sports in different packages.

YouTube TV is another option for cutting cable. Allows you to watch anywhere as its app is available for both Android and Apple iOS users. Offers NBCSN with a lot of other entertainment channels for $64.99 a month. Enjoy some of the broadcast in 4K if your device is compatible. It’s a good choice as it offers the lengthiest 2 weeks’ trial period. Grab the subscription right now for just $14.99/mo for the first month. (It’s a limited time offer)

Watch French Open in US via Hulu+ LiveTV

For $64.99/month, Hulu+ LiveTV offers NBC sports and many other entertainment and sports channels. As its students package begins at $1.99/month, it’s a good cable replacement. Users can also stream simultaneously on multiple devices. This means that the whole family benefits from one subscription.

How to Watch French Open in USA Avoiding Blackouts

If you are facing any local regional restrictions to access any of the official broadcasters online don’t worry. You won’t miss the tennis match. A hack is here. You can use a VPN to bypass blackouts of French Open live coverage in your area.

A VPN will connect you to a local USA server and it will tunnel (hide) your virtual IP address. So, your location will not be visible to the service provider.

Why to Choose Express VPN to Watch French Open in US

Is it easy? You just need a good and reliable VPN service. You can choose from a  wide range of VPN services. Nevertheless, I recommend ExpressVPN, since it is reliable and risk-free. Although it is a paid service, it allows a 30-day trial with a money-back guarantee. So, you can cancel the subscription if you don’t like the services.

There are other benefits to using Express VPN, such as the ability to use it on multiple devices at once. There is no need to worry about compatibility, ExpressVPN works on smartphones, computers, TVs, even on game consoles. If you feel any glitches, support is also available 24/7.

You need to follow these steps in order to use a VPN.